On RRZE’s HPC systems, you always have to allocate multiples of complete compute nodes (e.g. ppn=24 for LiMa). However, as SMT is enabled on all systems supporting it, it is quite common that you want to have less MPI processes running on a node than entries in the $PBS_NODEFILE are. Intel’s mpiexec.hydra does have the “-perhost #” option which is assumed to do what it tells. Well, reality is different. Starting with version 4.1.0.030 (version 4.1.0.024 was still o.k.), Intel does not respect the “-perhost” command line argument if mpiexec.hydra detects that the job is started within a job of the batch system.

Here is the answer from Intel’s support:

What does that mean? Well you cannot use Intel’s mpiexec.hydra on RRZE’s clusters together with -pernode  (unless you fiddle around with a custom hostfile manually. And never ever try to modify the contents of $PBS_NODEFILE! You will mess up the batch system completely. If you mean that you must generate your specific own hostfile, always create a new file and delete it once you no longer need it.)

If you nevertheless just use Intel’s mpiexec.hydra, your first nodes will always be filled completely (e.g. with 24 processes on LiMa) and, if you specified some -pernode, the last nodes will be just idle doing nothing. E.g. in case of LiMa and -pernode 12: half of the node nodes you requested will be idle while the other half gets overloaded. RRZE may kill such jobs wasting resources without further warning.

RRZE’s recommendation of typical users is to use /apps/rrze/bin/mpirun (or on Emmy mpirun_rrze which will be in the search patch once an intelmpi module is loaded) together with proper pinning of processes.

As delivered, our NVidia K20m GPGPUs were in GPU Operation Mode 1/COMPUTE. If one tries to start the Xorg server, /var/log/Xorg.0.log shows:

Using nvidia-smi --gom=0 and rebooting the node, the GPU Operation Mode can be set to 0/ALL_ON. Now, starting the Xorg server succeeds (and VirtualGL should work for remote visualization).

According to the documentation for NVidia driver 325.15, setting the GPU Operation Mode is only supported on  “GK110 M-class and X-class Tesla products from the Kepler family”.

The next OpenFOAM user group meeting (Stammtisch) in Southern Germany will take place on Friday 20.09.2013 at RRZE.

On Monday, July 29, eleven new water cooled racks for our new cluster have been delivered and brought to their final position in the server room which is now quite full. 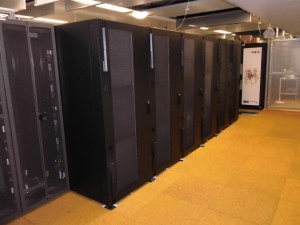 View from the entrance on one of the two rows of the new water cooled racks of the “Emmy” cluster which connect to the old “Woody” cluster in the front and which is close to the “LiMa” cluster in the back. 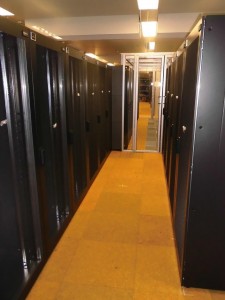 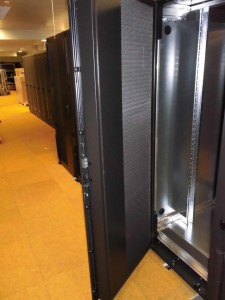 “Cool door” of the new water cooled racks of the “Emmy” cluster.

However, there is no clear date yet when the new racks will be connected to the cold water supply pipe nor when the compute hardware will be mounted. Let’s hope …

Recently, the operating system of one of RRZE’s HPC clusters was upgraded from SuSE SLES10 SP4 to SuSE SLES11 SP2 … one of the few things which broke due to the OS upgrade is Ansys/CFX-13.0. cfx5solve now aborts with

As one can expect, Ansys does not support running Ansys-13.0 on SuSE SLES11 or SLES11 SP2. There are also lots of reports on this error for different unsupported OS versions in the CFX forum at cfd-online but no explanations or workarounds yet.

So, where does the problem come from? A long story starts …

First guess: SuSE SLES11 SP2 runs a 3.0 kernel. Thus, there might be some script which does not correctly parse the uname or so. However, the problem persists if cfx5solve is run using uname26 (or the equivalent long setarch variant). On the other hand, the problem does not occur if e.g. a CentOS-5 chroot is started on the SLES11 SP2 kernel, i.e. still the same kernel but old user space. This clearly indicates that it is no kernel issue but some library or tool problem.

Next guess: Perl comes bundled with Ansys/CFX but it might be some other command line tool from the Linux distribution which is used by cfx5solve, e.g. sed and friends or some changed bash behavior. Using strace on cfx5solve reveals several calls of such tools. But actually, none of them is problematic.

The glibc cannot be overwritten using LD_LIBRARY_PATH as any another library. But there are ways to do it anyway …

Interlude: Let’s see how ccl2flow.exe is called. The shell wrapper for ccl2flow was already there, thus, let’s add some echo statements to the command line arguments and a sleep statement to inspect the working directory. Et vola. On a good system, a quite long ccl file has just been created before ccl2flow is called; however, on a bad system running the new OS the ccl file is almost empty. Thus, we should not blame ccl2flow.exe but what happens before. Well, before there is just the Ansys supplied perl running.

Let’s have a closer look at the perl script: Understanding what the cfx5solve Perl script does seems to be impossible. Even if the Perl script is traced on a good and bad system there are no real insights. At some point, the bad system does not return an object while the other does. Thus, let’s run perl using the old glibc version. That’s a little bit more tricky as cfx5solve is not a binary but a shell script which calls another shell script before finally calling an Ansys-supplied perl binary. But one can also manage these additional difficulties. Et vola, the error message disappeared. What’s going on? Perl is running fine but producing different results depending on the glibc version.

Interlude Ansys/CFX-14.0: This version if officially only supported on SuSE SLES11 but not SLES11 SP2 if I got it correctly. But it runs fine on SLES11 SP2, too. What Perl version do they use? Exactly the same version, even the very same binary (i.e. both binaries have the same checksum!). Thus, it is not the Perl itself but some CFX-specific library it dynamically loads.

End of the story? Not yet but Almost. Spending already so much time on the problem I finally wanted to know which glibc versions are good or evil. I already knew Redhat’s glibc-2.5 is good and SuSE’s glibc-2.11.3 is evil. Thus, let’s try the versions in between using the official sources from ftp.gnu.org/gnu/glibc. Versions <2.10 or so require a fix for the configure script to recognice a modern as or ld as good version. A few versions do not compile properly at all on my system. But there is no bad version, even with 2.11.3 there is no CFX error. Only starting from glibc-2.12.1 on there is the well-known ccl2flow error. Not really surprising. SuSE and other Linux distributors have long lists of patches they apply, including back-ports from newer releases. There are almost 100 SuSE patches included in their version of glibc-2.11.3-17.39.1; no chance to see what they are doing.

My next guess is that the problem must be a commit between 2.11.3 and 2.12.1 of the official glibc versions. GNU proves a Git repository and git bisect is your friend. This leads to commit f89d2f30 from Dec. 2009: Enable multiarch whenever possible. This commit did not change any actual code but only the default configuration parameters. That means, the code causing the fault must be in the sources already much before. It only debuted once multi-arch was switched on in 2.12.1 of the vanilla version or earlier in the SuSE version (the spec file contains an --enable-multi-arch line; proved).

Going back in history, it finally turns out that glibc commit ab6a873f from Jun 2009 (SSSE3 strcpy/stpcpy for x86-64) is responsible for the problems leading to the failing ccl2flow.

Unfortunately, it is not possible to see if the most recent glibc versions still cause problems as cfx5solve already aborts earlier with some error message (Can’t call method “numstring” on an undefined value).

It is also not clear whether it is a glibc error, a problem in one of the CFX library or if it just because of the tools used when Ansys-13.0 was compiled.

End of the story: If you a willing to take the risk of getting wrong results, you may make v130/CFX/tools/perl-5.8.0-1/bin/Linux-x86_64/perl use an older glibc version (or one compiled without multi-arch support) and thus avoid the ccl2flow error. But who knows what else fails visibly or behind the scene. There is a unknown risk of wrong results even if cfx5solve now runs in principle on SuSE SLES11 SP2.

I fully understand that users do not want to switch versions within a running project. Thus, it is really a pity that ISVs force users (and sys admins) to run very old OS versions. SuSE SLES 10 was released in 2006 and will reach end of general support in July 2013; SLES11 was released in March 2009 while Ansys13 was released only in autumn 2010. And we still shall stick to SLES10? It’s time to increase the pressure on ISVs or to start developing in-house codes again.

Recently, 40 additional nodes with an aggregated AVX-Linpack performance of 4 TFlop/s have been added to RRZE’s Woody cluster. The nodes were bought by RRZE and ECAP and shall provide additional resources especially for sequential and single-node throughput calculations. Each node has a single-socket socket with Intel’s latest “SandyBridge” 4-core CPUs (Xeon E3-1200 series), 8 GB of main memory, currently no harddisk (and thus no swap) and GBit ethernet.

Current status: most of the new nodes are available for general batch processing; the configuration and software environment stabilized

Queue configuration / how to submit jobs:

If STAR-CCM+ fails on large shared memory nodes with the message “mpid: Not enough shared memory”, your sysadmin might need to increase the kernel limits for SHMMAX (maximum size of shared memory segment in bytes), i.e. sysctl -w kernel.shmmax=.... Especially, the Ubuntu/Debian default of 32 MB seems to be too small even for 2-socket nodes with 8-core AMD Opteron processors, i.e. 16 cores/node …