While we publish daily stats for all of our mirrors at https://ftp.fau.de/cgi-bin/show-ftp-stats.cgi, there is currently no aggregation over a whole year. So here are the most used mirrors over the whole year:

Still only a small fraction of the traffic is via IPv6, 7.86% over all mirrors and the whole year. CTAN for some reason drops out of the IPv6 list (it would be at #17), its Top10 slot is taken over by Debian (#16 in the total list) which has an unusually large IPv6 share. That large share can be attributed mostly to the local Computer Science Department which has large pools with IPv6 capable Debian machines.

Since the beginning of September, we’ve been creating experimental GeoIP-statistics to see where the users of ftp.fau.de come from. We’re drawing nice maps from the results. You can find these stats from our general ftp statistics page – for days where GeoIP-stats are available, you will find a link to them at the bottom of the page. Here is an example: 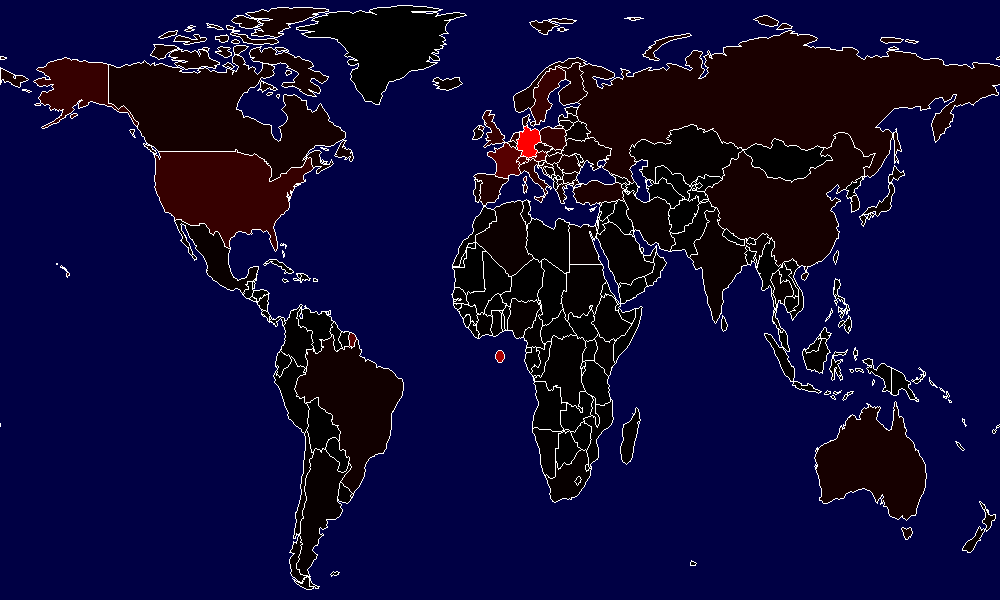 As you can see, unsurprisingly most of our users come from Germany. Besides the map there is also a table that show the respective percentages per country – in the map above, Germany accounts for about 50 percent of all accesses. Note that is counting the number of bytes transferred, not the number of accesses.

We also have a map from the stats per Bundesland within Germany: 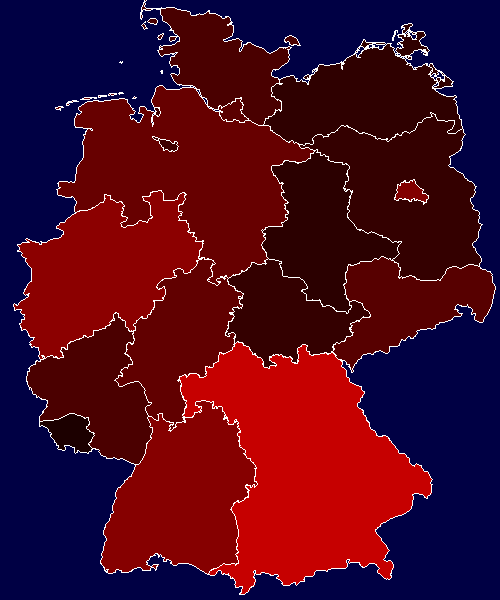 However, this second map is really mostly guesswork for a number of technical reasons:

Still, we do think it is a rather interesting experiment. While we were expecting most of our users to be from Germany, we found the actual percentage suprisingly high – we had expected some more usage from other european countries.

Over the last 2.5 months we have added a few new mirrors. Amongst those are:

We have improved the publicly available statistics for our FTP server. You can now see how much traffic each individual mirror makes, and how much of the traffic was IPv6 vs. IPv4. The statistics are available at https://ftp.fau.de/cgi-bin/show-ftp-stats.cgi.

With this, you can see for example that the latest OpenSuSE 13.1 release had a quite significant impact on our FTP: The statistics for 19. November 2013 show that we distributed almost 9 TB for opensuse on that day, more than 5 times the traffic of all other mirrors combined.

From this morning (October 01) on, ftp.uni-erlangen.de and ftp.fau.de point to new hardware.

The new machine is much more powerful than the old one, and we tried our best to make the mirroring setup as robust as possible. Hopefully, incosistent and outdated mirrors (because the mirror-job hung) are now a thing of the past. You can actually check this yourself: The FTP startpage lists the last successful run for all major mirrors, and there is also a page that shows how long the last mirror runs took and if they succeeded or not.

Another new feature on the startpage is that we show how much traffic the server has distributed the day before. We’re planning to further improve these stats, so that we can show the traffic per individual mirror. However, this is not finished yet.

The hardware specs of the new server are:

In general, most of the mirrors that existed on the old FTP should be available. Though they now no longer reside in sub-sub-directorys like e.g. /pub/mirrors/ubuntu or /mirrors/ubuntu but simply in /ubuntu instead, symlinks have been set up from the old locations so that old links should still work. We did however clean out some mirrors that no longer made sense, for example:

Should we accidently have dropped a mirror that you think still makes sense, or forgotten a symlink, feel free to contact us.

Some new mirrors were added:

Last but not least, the official name of the server is now “ftp.fau.de” instead of “ftp.uni-erlangen.de” – to fit with the “corporate identity” of FAU.

So go ahead and try the new FTP: