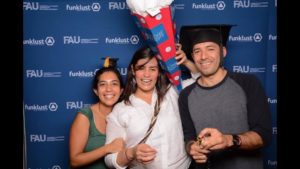 The exchange program between FLACSO’s department of Development, Environment and Territory and the Institute of Geography at FAU happens under the International Study and Training Partnerships (ISAP), sponsored by the German Academic Exchange Service. Us three (Mateo Roldán, Maria Isabel Villarruel and Maria Alejandra Escalante) were the first students from FLACSO who had the chance of studying through the winter semester at the FAU; we felt encouraged to leave a variety of our afterthoughts, anecdotes, and reflections about our experiences in Germany collected in this blog.

Travelling and living abroad, is always a positive and enriching experience. Personally, I had the luck to study my undergrad in Argentina, so when I heard about the exchange program from FLACSO, I had no doubt about applying! I had been longing for that same experience for a long time.

After all the paperwork and formalities (which are a lot, both in Ecuador and then in Germany), arriving to Erlangen was a great moment! A new city, a new university, new friends, new classes… Erlangen is a really friendly city, and everything is perfectly organized; the city has an old area from medieval times (on the north and close to the river), and the main square, where the main FAU building is located, dates back to the 18th century. Erlangen is also a small city and has a lot of students, most of the city’s population commutes and transport around in bicycles! Try to get a bicycle as soon as you get there, you’ll save money and you’ll have the freedom to move around anytime you want. Even after partying, Erlangers use bicycles to return to their homes.

The FAU community is very diverse and has a lot of foreign students, and besides this, the International Affairs Office, organizes on the first weeks of the semester, some various trips and events for internationals to meet. Particularly, our classmates from the Kulturgeographie Masters, were very nice and very friendly. Try to enroll on the German language classes, and to learn it, this will allow you to meet other internationals (asian, latin, east european, etc.) and learning how to speak at least basic German will help a lot during your time there.

I think that one of the greatest and most fortunate experiences in life is leaving your own country, because it allows you to interact with other cultures, make new friends and it helps you understand different processes. I, as a woman and from South America, know that this experience was a huge privilege, since the majority of the population is unable to access to higher education degrees.

Therefore, for me being able to live in Germany and study in FAU University was an eye opening experience, mainly for two reasons. The first one is related to nature, the variation of the seasons and the differences in biodiversity. I wonder for the changing colors, the losing leaves and mainly the cold weather, however it also made me think of all the threats that our own ecosystems go through and how different countries address these issues. Also, how economic power becomes a danger for the nature, especially if there are economic interests. In this area, the professors at the university were very open and willing to discuss different realities.

The second one is related to social knowledge, which personally is my weakest area. The way that the classes were carried out, allowed us to comprehend different aspects of political actions in Germany and around the world. Many questions arise from this experience and I hope to be able to answer them through research and more exchange programs like this one.

Being a foreigner in a new land is both thrilling and challenging—language, social dynamics, local politics and history—will always be determining factors in the overall experience of the place. Once I arrived to Erlangen and FAU, it took me several weeks to realize that I was now living in a completely new place: a small student-city in southern Germany. I understood so little of what happened around me!

By the time I was starting to feel more comfortable with the class discussions, with the language (intensive german courses and daily practice help a lot!), with new friends, professors, and colleagues, and with the actual punctuality and regional-wide train system, it was already time to leave….the semester in Erlangen passed by quite quickly! I am left with lots of gratitude to the people that were part of this journey and actively recommend everyone interested to apply for the next exchange round. In particular, I want to highlight two aspects that are still very present for me.

One is about the privilege that we carry for being able to study, and do so abroad. We, master students, belong to a small portion of the population who get to develop their academic interests even further with dedicated time and support. Many others do not have the luxury of devoting time and resources to this path, much less doing so abroad when there are so many bureaucratic and economic requirements that are often difficult to navigate, particularly if you come to Europe from a Global South country. While I do not praise academic education over other ways of growing as an individual, I think there is certain responsibility for us in these spaces to critically choose what we do with the knowledge, abilities, and skills we acquire. Can I draw parallels between these German and Ecuadorian academic institution to make improvements in both institutions? Can the different conceptual understandings here and there of geography, territory, local politics, social agency, or even climate change complement each other? What can Latin American and European geography scholars develop in tandem, and for who? These are some of the poignant questions still floating in my mind after this exchange program.

Also, another big afterthought for me comes from being in Erlangen during this particular time when there is deep political discussion about the meanings and proceedings attached to incoming migration into the European Union, and Germany for this case. As Latin American exchange students, we only get to see a minimal part of the complexities of migrating or seeking refuge in Germany. Yet, by talking to other international students and taking the Migration in the Global Age class at FAU, I can start seeing educational institutions as central to guiding the discussion around integration and migration policies, and also being a place of haven and opportunities for many. FAU, with its international student office, has received more or less 500 international students since 2015 seeking refuge and asylum in Germany. However, the funding for this program is soon to be finished and I wonder if this decision will close certain doors for many potential students. In the same way, and in a parallel discussion, I wonder how in Colombia (where I am originally from) and in Ecuador, are educational institutions responding to new patterns of migration from rural to urban areas, and from people moving in from other countries in distress like Venezuela or Cuba, for example.