The ISC High Performance 2020 paper deadline is on October 21 November 4. This time, ISC has decided to provide free-of-charge Gold Open Access for all accepted papers. Presenters will receive a free conference day pass for the day of their talk. In addition, there are prestigious awards to win: The Hans Meuer Award and the GCS Award, each including a cash prize of 5000 €.

ISC has been improving the quality of their scientific program significantly in recent years. In 2018 and 2019, the paper acceptance rate was about 25%. The program committees comprise renowned researchers from all sectors of HPC.

This year’s International Supercomputer Conference (ISC15) in Frankfurt is going to host workshops for the first time. Luckily, our proposal was accepted so there will be a workshop on “Performance Modeling: Methods and Applications,” featuring many renowned experts on performance modeling techniques. Bill Gropp has agreed to present the keynote talk, and we aim at a broad overview of the field that should be suitable for an audience with a wide spread of prior knowledge. So if you plan to visit ISC, July 16 is the date! See the ISC15 Agenda Planner – Performance Modeling Workshop for more information.

All good things must end. In a heroic battle the Gaussian Elimination Squad was beaten by the “Brilliant Dummies” from Seoul University. We were quite a bit ahead after the trivia round, but the coding challenge was a real neck-breaker. We couldn’t even find the spot where one should start leveraging parallelism, and we ended up with a disappointing speedup of just above 1.

The Squad congratulates the Korean team, it was a great fight! We hope to return next year to SC15 in Austin, Texas.

At 8pm Central Time today, the Gaussian Elimination Squad fought their first round of the Intel Parallel Universe Computing Challenge against the “Invincible Buckeyes,” representing the Ohio Supercomputing Center and Ohio State University, at the SC14 conference. I have to admit that I needed to look up “buckeye” in the dictionary, where I learned that “buckeye” is a tree (going by the scientific name “Aesculus“, also known as the “chestnut”) as well as a nickname for residents of the U.S. state of Ohio. Nice pun, but no match for the kick-ass, brilliancy-radiating nom de guerre of the German team!

Just as last year, this is a single-elimination tournament, with eight teams fighting one-on-one in seven matches. Each match consists of two parts. The first is a trivia round, with questions about computing, parallelism, the history of supercomputing, and the SC conference series. The faster you select the correct answer (out of four), the more points you collect. After the trivia we had a slight advantage, but there was no reason to be over-confident. In the second part, the coding challenge, we had ten minutes to parallelize and optimize a piece of code (that we hadn’t seen before, of course). In a team effort without equal we managed to get a mind-boggling 240x performance speedup compared to the original version on the Intel Xeon Phi! The Buckeyes were stuck at something like 6x. Hence, this round goes to The Squad, and we are eagerly looking forward to the semi-finals on Wednesday.

In case you haven’t heard it yet: The “Gaussian Elimination Squad” will defend their title in the “Intel Parallel Universe Computing Challenge” at SC14 in New Orleans. We have finally put together the team! Here it is:

The teams all get their share of attention now at Intel’s website. AFAIK they are still looking for submissions, so take your chance to get thrashed! Figuratively speaking, of course. 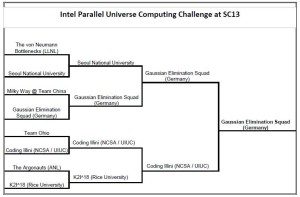 We’ve made it! The final round against the “Coding Illini” team, comprising members from the University of Illinois and the National Center for Supercomputing Applications (NCSA), took place on Thursday, November 21, at 2pm Mountain Time. We were almost 30% ahead of the other team after the trivia, and managed to extend that head start in the coding challenge, which required the parallelization of a histogram computation. This involved quite a lot of typing, since OpenMP does not allow private clauses and reductions for arrays in C++. My request for a standard-sized keyboard was denied so we had to cope with a compact one, which made fast typing a little hard. As you can see in the video, a large crowd had gathered around the Intel booth to cheer for their teams.

Remember, each match consisted of two parts: The first was a trivia challenge with 15 questions about computing, computer history, programming languages, and the SC conference series. We were given 30 seconds per question, and the faster we logged in the correct answer (out of four), the more points we got. The second part was a coding challenge, which gave each team ten minutes to speed up a piece of code they had never seen before as much as possible. On top of it all, the audience could watch what we were doing on two giant screens. 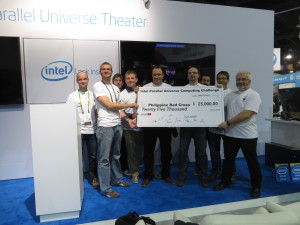 In the first match against the Chinese “Milky Way” team, the code was a 2D nine-point Jacobi solver; an easy task by all means. We did well on that, with the exception that we didn’t think of using non-temporal stores for the target array, something that Gerhard and I had described in detail the day before in our tutorial! Fortunately, the Chinese had the same problem and we came out first. In the semi-final against Korea, the code was a multi-phase lattice-Boltzmann solver written in Fortran 90. After a first surge of optimism (after all, LBM has been a research topic in Erlangen for more than a decade) we saw that the code was quite complex. We won, but we’re still not quite sure whether it was sheer luck (and the Korean team not knowing Fortran). Compared to that, the histogram code in the final match was almost trivial apart from the typing problem.

According to an enthusiastic spectator we had “the nerdiest team name ever!”

After winning the challenge, the “Gaussian Elimination Squad” proudly presented a check for a $25,000 donation to the benefit of the Philippines Red Cross.

I think that all teams did a great job, especially when taking into account the extreme stress levels caused by the insane time limit, and everyone watching the (sometimes not-so-brilliant) code that we wrote! It’s striking that none of the US HPC leadership facilities made it to the final match – they all dropped out in the first round (see the team bracket above).

We’ve made it to the finals! After a slight disadvantage in the trivia round, we managed to catch up and overtake the Korean team in the coding challenge. It was not strictly a surge of pure brilliance, but who cares… Tomorrow, Thursday 2pm Mountain Time it is, against the winner of the other semi-final (Rice University or NCSA/Illinois). 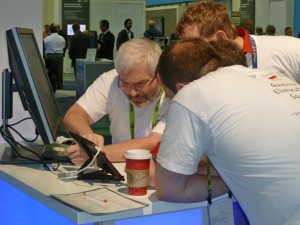 Today, the “Gaussian Elimination Squad” has kicked the Chinese team out of the competition! So we’re up for the semi-finals tomorrow (Wednesday) at 4pm Mountain Time.

Intel has finally disclosed the list of teams and team members for the “SC13 Parallel Universe Computing Challenge:” Five teams from the US (including LLNL and ANL), one from China, one from Korea, and one from Germany: http://software.intel.com/en-us/supercomputing#pid-20366-1690 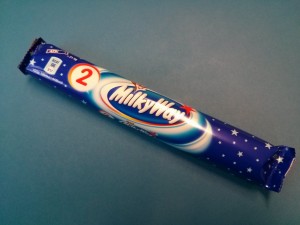