At SC14 in New Orleans we (Jan Treibig and I, with help by Thomas William from TU Dresden) conducted, for the first time, a BoF with the title “Code Optimization War Stories.” Its purpose was to share and discuss several interesting and (hopefully) surprising ventures in code optimization. Despite the fact that we were accused by an anonymous reviewer of using “sexist language” that was “off-putting and not welcoming” (the offending terms in our proposal being “man-hours” and “war stories”), the BoF sparked significant interest with some 60 attendees. In parallel to the talks and discussions, participants were asked to fill out a survey about several aspects of their daily work, which programming languages and programming models they use, how they approach program optimization, whether they use tools, etc. The results are now available after I have finally gotten around to typing in the answers given on the paper version; fortunately, more than half of the people went for the online version. Overall we had 29 responses. Download the condensed results here:  CodeOptimizationWarStories_SurveyResults.pdf

The results are, in my opinion, partly surprising and partly expected. Note that there is an inherent bias here since the audience was composed of people specifically interested in code optimization (according to the first survey question, they were mostly developers and domain scientists); believe it or not, such a a crowd is by no means a representative sample of all attendees of SC14, let alone the whole HPC community. The following observations should thus be taken with a grain of salt. Or two.

Management summary: In short, people mostly write OpenMP and MPI-parallel programs in C, C++, or Fortran. The awareness of SIMD is surprisingly strong, which is probably why single-core optimization is almost as popular as socket, node, or massively parallel tuning.  x86 is the dominant architecture, time to solution is the most important target metric, and hardly anyone cares about power dissipation. The most popular tools are the simple ones: gprof and friends mostly, supported by some hardware metrics. Among those, cache misses are still everybody’s darling. Among the few who use performance models at all, it’s almost exclusively Roofline. 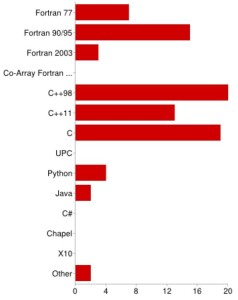 What is the programming language that you mostly deal with when optimizing code?

Here are the details:

As I wrote above, there is a strong bias in these answers, and the results are clearly not representative of the HPC community. But if we accept that those who attended the BoF are really interested in optimizing application code, the conclusion must be that recent developments in tools and models trickle into this community at a very slow rate.